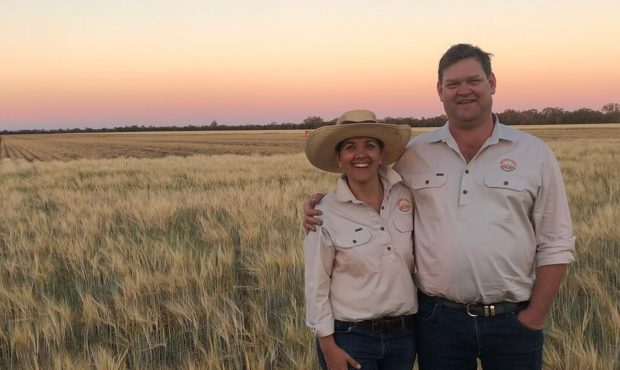 The past 30 years of agricultural productivity gains has been based on 3 things. 1) Bigger tractors and farm machinery so farmers can farm more land in one day, 2) complete reliance on pesticides and synthetic fertilizers and 3) genetically modified crops.  But more of the same won’t work – agriculture needs another revolution. Our robots make farming more efficient, and allow farmers to increase yields and to grow food more sustainably. Our technology is all about bringing new farming techniques and field practices into agriculture and putting these methods into the hands of farmers.

At SwarmFarm, we believe agricultural robotics is about to transform farming on a very steep adoption path. In 2 years’ time, most farmers will at least have seen a robot working out in a field somewhere, and in 5 years’ time, we will be at infection point where robots are commonplace on farms around the world.

Andrew Bate, who is also my husband, and I (Jocie Bate) are farmers and grow wheat, chickpea, mungbeans and sorghum. I also run beef cattle. SwarmFarm was borne out of a necessary to find more sustainable ways to produce crops. We started out by initiating a university research project to develop our first robot, and the technology grew from there. Today we are a team of 16 people and are one of the only companies, worldwide that are actually delivering autonomous robots to commercial farmers. We are very proud of our team and yes, this is my dream job!!

Our robots are a technology platform for autonomous agriculture. Our robots are used across many industries including cotton, grain, turf, orchards and even to protect the environment on mining sites. We don’t actually develop the technology that goes onboard our robots, such as the weeding tools, sprayers or mowing attachments – rather we partner with other companies and work with them to integrate their technology as “apps” on board our robots.

We are not a “one trick pony”, so rather than trying to develop every tool or attachment on board our robot, we are an open platform that is allowing farmers, agronomists and agtech developers to develop and release agtech solutions at a micro level. This means that agtech solutions are delivered at a local level to solve problems that match a particular soil type, climate or production system. Ultimately, the more “apps” or tools that are released on board our robots, the more value they offer to our farmer customers.  So far we are already delivering our robots to Australian customers and next year we will start on our first international delivery.  We hope we will be seeing our technology rolled out across the world and delivering better farming techniques and methods to farmers not only in first world nations, but also in developing nations.

Robot technology that works outside in an unstructured environment is not easy. It’s not hard to make a robot that can drive up and down a row, but to make it reliable, safe and able to work in field conditions 24/7, has taken years of work. Robots have to be reliable and tough, because farmers have to be able to rely on this technology to produce their crop, otherwise it’s just a toy. That’s why to date, we haven’t seem unmanned, autonomous robots working in agriculture.

We are also based in a rural area hundreds of kilometres from a capital city. Early on, it was hard to meet the people and connections in other tech companies, because most of them are based in cities. However, the advantage was that we fast tracked our technology development and empower our deep connections to farmers.

We joined the Future Agro Challenge Competition to meet other agtechs and build stronger networks amongst other tech companies.  I had no idea just how great the connections and friendships from FAC would be! I now have connections all over the world and insight into all sorts of other agtech companies.  I had only ever pitched once before I entered the FAC so I’m very new to this.  There is no other event, anywhere in the world that recognises  and celebrates the achievements of agtech companies like FAC.

The world belongs to those who stand up and have a go. Nothing happens by just thinking about an opportunity that you never begin.  A good friend once said to me – “you have to be standing in the way of luck if you want it to run you over!”